I’ve wanted to start something else while i work on the Leighton Art Centre exhibit piece, as i have enough time before the deadline to implement other ideas for separate work. This one has sat in my sketchbook since 2012 0r 2013 (?), and i’ve been wanting to do something with it for a long time obviously.

And since i tend to alternate “natural” with COLOUR when i make things, first i wanted to do this : 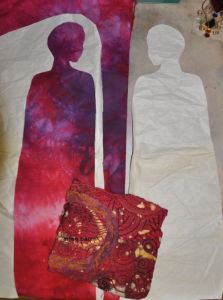 (And i will, because that is lovely. Maybe even two of the figures as shown, on that parfait dyed cotton i did a couple of years ago.)

BUT, then i realized this might work with the Leighton thing too.

OO, if i flip the fabric, she has an eye! 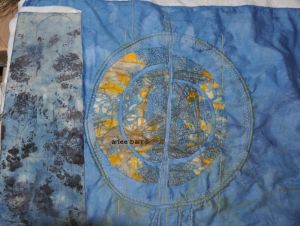 Hey, there’s still some of the moon fabric left, and the indigo dyed silk thread as well! 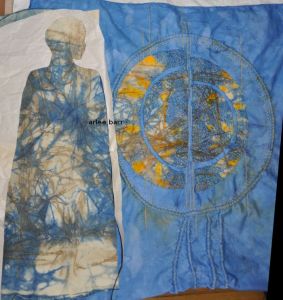 I think she needs a bit of enhancement as well, but not sure if i’ll add the safrrony-yellow-orange— or maybe a violet for shading.

And maybe i can add the long roots piece back as well, IF i space things out a bit more, so they don’t look so crowded.

I might do this one as well. Perhaps there could be a series of these, in different moods and treatments.