While i want the hexes/honeycombs/cells again on this piece, this time i want to stay away from bees! They are a recurring motif in my work, but beyond just laying there on the surface, they really wouldn’t be adding much to the story, so no bees this time, i promised myself.

But what else often shows up? Yes, rivers and roots, but not for this, methinks. MMMM, roses.

From “The Weight She Carries”:

Being as it is now the end of August, and Autumn is moving closer, it’s not the flowers that are around now, (though they will make an appearance as well), but the “fruit”, the rose hips. And so, until she has an “official” title, she shall answer to “Rosehips” 🙂

Fortunately, there is a yard down the way that has a wondrous showing of rosehips, so i quickly did a clip-by and brought these home to study: 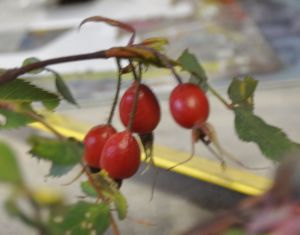 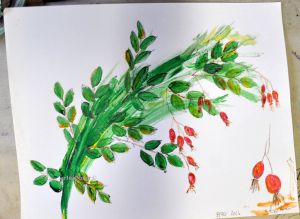 Now i have to dig out some more fabrics and figure out HOW i will use these on this:

(Actually i already know what fabrics and what technique i will use, so stay tuned for that 😉 )

This is rather a trite exercise below, but who knows how it will transform with stitch? This cloth wasn’t terribly successful on its own during residency, so maybe just a bit of make up, and it won’t be such a plain jane! 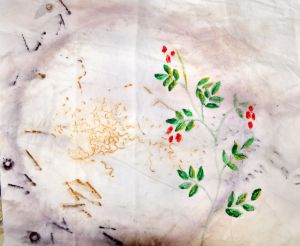 On the other hand, it may just become a sampler/test cloth, which is okay too.

And just because traditionally one shows off one’s garden produce: 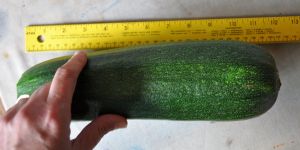 This one slipped under the radar by hiding under a monster leaf–i don’t usually let them get any bigger than 4-5″ long and easily circled by one hand, as it’s too much for one “sitting” to eat. Still tasted great though–pan-fried with butter and garlic, then dipped in sour cream-MMMMMMMMMMMMMM!