That’s a Binary table above. I wrote out the entire phrase in it, punctuation included, and surmised that it would be insane to stitch the whole thing this way…………I’m “translating” a phrase that holds 58 characters, a piece of cake in regular text, but multiply those by 8 and that’s 464 little marks! The space available for that means my “numbers” have to be too tiny, which makes them impossible to read, and therefore pointless, and the TIME to do this wholly in Binary would exceed my timeline–given that there are other parts that still need working.

Truly, the punctuation does not have to be in Binary, and when i started looking at the phrase, certain words jumped out, and became another phrase in themselves, fitting with(in) the original phrase, the meaning of the whole and *as* another consequential but purposeful catch of words. It also lessens the numbers of signifiers by 238, so i have “only” (HA) 226 to do. Given that some of these are now going to be actual letters/words, it’s less daunting, and requires less space, time and layout!

Yesterday at ACAD, i made a start as i waited for fabrics to percolate and imprint. And it took less time than i thought, not as much a worry as anticipated! 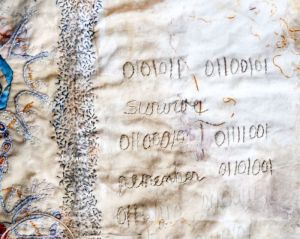 Proofreading was the hardest part 🙂

5 responses to “an elegant solution”

4 days (including today) left for SALE in shop. ENDS June 17/21.
Thundering sky! Eight days left in the sale and the shop is stuffed! Lots of natural colour and natural fibres to add to your stitchy stash! See profile for shop info and save!
June sale! Please read the listing on my shop site for info on applying discounts. A return of the Velvetarian's Delight is there along with a few other beauties, and I will list continuously as magic emerges from my dyepots.