EDIT March 30/19: Since these experiments, i have come to realize, and proven with wash and lightfast tests, that hollyhocks of any colour are NOT dyes. They contain anthocyanins, which are notoriously unstable, thereby creating “fugitive” colour only. Even my Dye Guru, the expert herself, Jenny Dean, has confirmed this. Samples bleached out in the sun in two weeks. All blooms are now in the compost.

In physics, string theory is a theoretical framework in which the point-like particles of particle physics are replaced by one-dimensional objects called strings. It describes how these strings propagate through space and interact with each other. Here’s my version 🙂 Let’s see how one dimensional my threads are after they propagate with dyes, mordants and modifiers, and how they interact with a needle and cloth!

I’ve collected hollyhock blooms ever since i realized they could be used to dye with (2010). “Amassing” is not really a word i’d apply to this practice though: in the beginning i had huge swathes of them growing beside the house, but as the years went by, rust disease and aphids took their toll.

Above, this is what it looked like when we moved into this house in 2009.

very sad in comparison, but there is hope, because last year it looked like this:

These were the darkest i’ve had before:

I have maybe 8 plants now, only 4 of which are any good for dyeing with. One of my summer morning rituals is to go with coffee in hand, and collect the finished blooms from all the dark flowering specimens. The pale pinks give barely any results, and anything in any other colour family yields nothing. Each plant gives up maybe 30-50 blooms each *over the season*, so there’s not a lot of frenzied picking activity! Patience and anticipation are the key words 🙂

This year i have this beauty in the side bed: 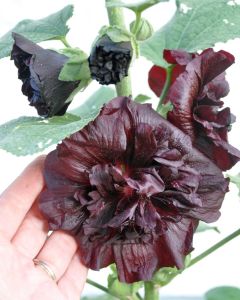 Darker than any i’ve had before, and with a huge bloom, i’m keeping them separate from the others, curious to see if there is a difference.

These are the wool threads i did with the smaller blooms collected from previous years:

I’ll have to wait probably until the end of August to have enough of the new darker blooms to work with though!

I have a fermentation hollyhock bath going as well, and will decant that when i can stand waiting no longer.

3 responses to “string theory in the hollyhock bed”