Whoa! It’s a good thing that Blurb has easy to follow parameters and diagrams, and a better thing that i was able to bring into play old layout skills i learned in my teens!

I finished this on Aug 13th, and immediately ordered two copies: one for me, and one for the person who commissioned the work. Had to hold my breath until the 24th of August (Actually arrived on the 21st!) ) to have them in my hands, but OH OH OH, i’m so glad i did this. 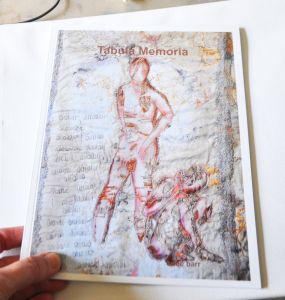 Right from the beginning, i had all the digital originals in backed up files, and the physical sampling, writing and sketches in a distinct studio folder. The first time i tried to “make book”, i had no idea what i was doing, and tried to upload small photos with low resolution. (KEEP YOUR ORIGINALS!!!!!!!!!!!!!!!!!! And make sure they are properly edited and presented, none of this “there’s my 3 feet of floor around the 1 foot sized piece…. ) Figuring out the layout, the order, and the relevance of specific things for that endeavour was a nightmare, as i hadn’t documented as i went along. I also didn’t hit “save as” when i should have, and that book is gone, except for a few screenshots!

You *have* to pay attention to details, when self publishing. Unless you have a trusted, erudite, educated and very literate friend to proofread for you, trust the guides they give you! 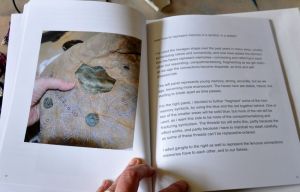 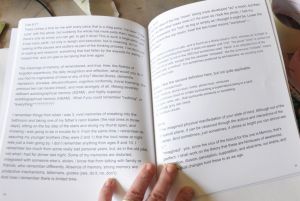 In my mid teens, i worked for a small Canadian “literary” magazine in Guelph, Ontario, and one of my many jobs was actual layout of photos and text. Those were the days when it was “physical” work, printouts that had to be manually manipulated and then pasted down to a master sheet. While i had naive dreams then of being a poet, i never actually thought i could do my own books, never mind have them printed. The exception is a slim “chapbook” of poetry, published by a small London Ontario press, in 1978. “Tiger of a Different Colour” does have an ISBN though 🙂  (That little magazine converted to Communism, and fired me when i wouldn’t go to Ottawa and participate in a possibly dangerous and illegal protest, risking arrest and jail! I was 16 and incredibly innocent, but i wasn’t STOOPID.) Edit: an hour after, i still have *most* of the work that was to be featured in that first book–i *can* rephotograph!

Now i’m thinking i really want to do a How To book after all, possibly from the FrankenStitch classes i have taught online.

8 responses to “the “Tabula Memoria” journal”