(I actually wrote this post at the *beginning* of 2017, never published it, and for the most part, did nothing with the piece i’m talking about…)

Jan 23/17: January means re-organizing, prioritizing in my stoodio. I dig through drawers and boxes, sorting, knowing some things will never be finished, but unable to part with them, making new stacks of “possibles”, and a bit of clenchedteethtossing of a few, VERY FEW, pieces. I get fired up by beads, miniscule scraplets of cloth, short ends of thread, and serendipitous colour combinations when things fall on each other.

And then, i find

This whale takes up a lot of space, literally and figuratively. Once in awhile, the currents of present day sweep it back under the waters, and it sinks, sulking at the bottom of my subconscious for months, and then when i least expect, it breaches loudly, and sings, briefly, but oh so emphatically. I *know* i had the right idea when i first conceived it, but, but, but, BUT.

Is it any wonder i can get nothing done, feel no gumption, have no inspiration? Piles and messes like this used to really inspire me; now i just walk away from it, overwhelmed, disgusted, bored, frustrated. There are cupboards and bins not visible, full of fabrics slated for projects, and a lot OF projects in progress/notprogress. I’ll spare you those. Time AGAIN to re-organize, declutter, throw out.

In particular, the Great White Whale has been packed away since April 2014, with maybe a 10th of the expanse worked. It was overly ambitious, daunting, heavy in my lap and on my mind. I even had a separate blog for it, now private as i couldn’t bear to see it myself, never mind anyone else…. (I *might* re-open it, depending on depending on…)

I’ve worked on only maybe a 1oth of the area (not that the area is finished…). 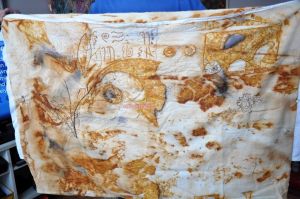 That photo does no justice either to what i *have* done.

Everything on it got away from me. I *didn’t* believe in it anymore. Too many ideas and interpretations, i had intended it to be a record of sorts of my practice and evolution, but it’s just a damn sampler now.

Scissors, we will have scissors.

It never had to be ONE piece of cloth. I’m going to be cutting to cut, re-arrange, overlap, make deliberate spaces, maybe even holes, patches, whatever. Because i also see the photos like this: 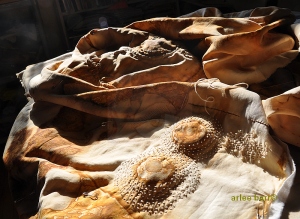 and fall in love again.