Throw it and see if it sticks!

Not much happening by hand, but a lot of “research” has been on the table. I ordered a copy of a very old illustrated anatomy book “De Humani Corporis Fabrica/The Fabric of the Human Body” (much abridged and less annotated, as the actual book reprinted costs $1650US………..) Vesalius didn’t get it all right (dog parts anyone?), but my own copy fits the bill for inspiration. I do still love body parts in my own work 🙂

I found out about this book from an episode of either “Criminal Minds”, or  “Cardinal” or something similar! Some serial killer had it on his coffee table…and that’s where i keep most of mine while perusing them 🙂

I also signed a great WHACK of textiles design books out of the library, not how to’s, but histories and pattern bases focusing on yardage. Intriguing how design in this field changes, re-occurs, cycles and reflects.

Since i am now dealing with heart issues (mild to moderate damage, so FIXABLE), i have returned to that part of the ol’ bag of bones, squidgy bits and blood we all wear. Inspired by the “electrical current” of the heart, i’ve also been painting and drawing and note making about this:

A very liberal depiction, but adequate for the task. More accurate below, though of course with science and art, there’s never a way to actually capture electricity naturally moving through a body! 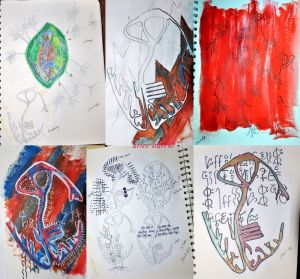 It may be that none of these specifically will make it to cloth, but that black and red combo is really speaking to me again. (I keep remembering Raggedy Black Heart, and red used to feature quite often in my work, pre hand stitch obsession.) I have huge yardages of both in cotton, and have to venture into the back room to dig them out. I have 11tybajillion ideas, but know i am going to be sidetracked, (have in mind some functional objects as well) and that’s okay. I need to be doing something, and that’s all that counts. Maybe the art is there.

I had my Thalium heart test yesterday, and am keeping my hoofies crossed that the “mild to moderate damage” is more to the MILD side. I’m also giving a round of gold stars and hero biscuits to the tech who could actually find my vein for the IV without butchering my arm ( my veins really really hide but we discovered Left Arm is more co-operative..), the one who cheered me on at the treadmill and took graciously my blurted “well, fuck you” when she said she’d had *her* morning coffee (i’d had none since 630AM the day before, woe is me), the nuke crew member who got the thalium into the IV without me even noticing (!), and the one running the MRI who chortled when i screeched “WHAT?” when the machine told me to stop breathing. I don’t feel quite “normal” this morning, but given that up to a month after, you have to show paperwork that says what was done to you if you are travelling–don’t want to set off those security checks with radioactivity!—-i don’t feel too bad. The only visible sign of anything happening is the bruises on both arms from the blood pressure bands–kept telling them THAT hurt more than the IV! (Apparently Right Arm is the one that can have the dystolic heard!)

Obviously there are going to be some major life style changes made because of all this. I’m not a sloth, but neither have i been a cheetah!