Oh so close to disaster! My brain must have done a fancy flip of some sort, because on Saturday i was bemoaning to Greyman, that i couldn’t seem to get the madder pot to 140C. He most emphatically with gestures and other well chosen words reminded me that boiling point of water is 120C, and WHY WOULD I WANT IT THAT HOT????? Oh BUGGER…that’s the Fahrenheit temp, the Celsius should be 60!!!!!!!!!!!! I whipped the pot off the burner just as it reached 70C, and fortunately the short time at that temp doesn’t seem to have hurt the results too much. (Too high a temp with madder, and you destroy the reds, and get browns only.)

On a side note,  the Greyman puts up with a lot in the dye department–after all, he *almost* accepts when he comes home at suppertime that this is spaghetti and sauce……   🙂 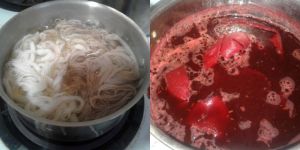 I greatly increased the WOF this time, reasoning that hoarding the darn stuff is pointless–ya bought it for using: USE IT!!!!! Recommended WOF for madder is 35-100% after all. It’s not worth cheaping out: you can’t add another egg to a cake after it’s already baked. (Yeah yeah, one can overdye, but why add another step and more dye material?) 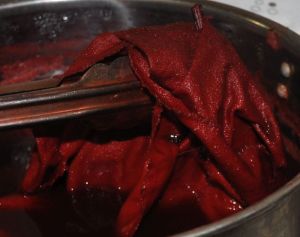 And of course, while the above photo makes it look EXACTLY like what i desire most in madder, fabrics always dry lighter, whether a synthetic dye or a natural.

The resultant colour is much better, though still not quite as deep as i’d like–and note too, while it’s almost impossible to get even results on large pieces(above, actually folded in half, and around  20×34″), i obviously need a much larger pot for movement so i don’t have such conspicuous squish marks 🙂 Still, i kind of like the effect! I’m pretty much sticking to cotton too, as getting madder red on silk is a LOT of different steps and chemicals, some of which i’m not sure i’d like to do/use at this time. Getting this depth of red though on cellulose is rather special too so, though i want the red that Kate Bowles got on hers, and have informed her via Instagram that from now on that coveted shade is “Kate Bowles Red”, i’m quite sure i’m on the way to what i want!

I’ll try some post mordanting/modifying on small bits of this to see if i can get closer to that wet-in-the-pot shade.

I’ll be throwing some threads and lace in there next, as additions to the Summer Madder Project garment. They’re stewing in the first part of the mordanting process, so won’t be in until tomorrow night at the earliest.

I’ve also been playing with a “new” mordant, something is becoming quite popular with ecoprinting, a fine powder called Titanium Oxalate. I was abbreviating it to Titox, but Greyman thought that was hilarious, so have gone to the accredited TO appellation 🙂 On weaker madder shades however, it seems to strip out the colour.

Won’t be using it as a madder additive then!

BUT, i also found another use for it besides it’s usual for creating orange-r yellows:

and strange colour/chemical reactions like this green on logwood purple:

A funny little tip for you, if you A. properly mordant your fabrics (but forget if they’re finished when you pack them away) and B. keep a wee tiny jar of Titanium oxalate, then you’ve got a handy dandy little tester for mordants. Tear off a tiny strip of the fabric, dip the end in the TO, and if it turns bright yellow, it’s mordanted with alum (silk) or alum and tannin (cotton). If it’s pale pale cream, it’s unmordanted!

And now i REALLY need to start actual STITCHING on this Summer Madder Project. I’ve decided to start with pockets–cause i’m tired of not having any! I had to revise my plan a wee bit due to the way i do my “embrilting”, so instead of a “top”, it’s going to be more of a jacket/wrap/coatlet of some sort.

Roughs for roses. I don't keep sketchbooks that make anyone gasp with wonderment and awe: I consider them workhorses because i' d rather be making/translating ideas into the flesh, then illustrating them and (to me) wasting that time. I greatly admire those beautiful tomes, but I don't have the patience or interest. I plan on doing a bunch of these roses to use on my DillyDally Coat. (Naturally dyed of course😁) Besides, when I sketch or paint ideas, I sometimes ruin things before I can stop myself. The last shot with colour is heavy-handed but I like the colourway!
Hesitant to work with silk velvet? I have some small "decks" of 5 different colourways, and some tips to work with this slithery slippery sneaky fabric that will have you easily adding to your stitchy vocabulary. See profile for shop info and first comment for a link to a mini tutorial.
Wow, these cotton embroidery thread shades are hard to photograph! In some lights they are browner, in some bluer, in some more purple! To me that means there's a lot of life and nuance to them and I'm looking forward to using them. This was the test batch, and thank you @bluetrilliumtex for the Canadian grown weld to try out! There's a bigger run being done now and I'm hoping for a wider range of greens and greeny-blues.