I’ve often mentioned that our backyard is a wildlife corridor of sorts, and a refuge as well. This whole month has been a pleasure as the animals prepare for winter, grab snacks and rest. All photos are clickable for enlargement.

During the snows, at the beginning of October, the “bird cam” was very busy: 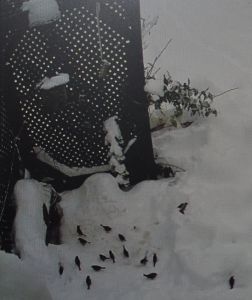 They rest in the raspberry bushes as well (top right side by patio trellis). And soft hearted as i am, i have a little “greenhouse” outside on that patio, that you can’t see in these shots, that i have covered with landscape cloth and some plastic, set cut apple branches in and various tipped pots, as they often shelter in there during bad days. I thought they may as well be comfortable! The raspberry bushes become denuded, as they are the last leaves to be eaten by the deer 🙂 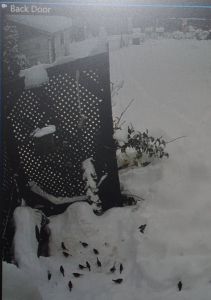 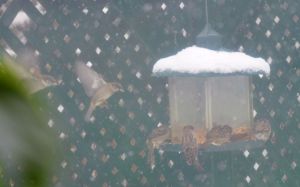 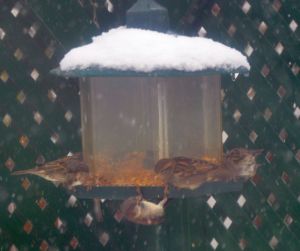 The deer visit regularly at night, usually a Mama and her two babies, though Greyman unsuspectingly walked out late one night, and just about into the butt end of a buck! 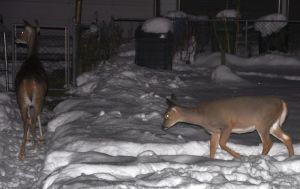 The last week has been quite busy! Mama is getting ready for Halloween 🙂

While the babies rest: 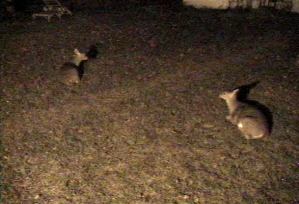 We missed the shot of Billy trundling by them, on the way to the apple tree! They barely moved, as i guess they’ve seen him often enough 🙂

The apple tree is a favourite of Blondie and Milton as well. (Milton is too shy to have his picture taken.)

And then there’s Billy Idol. We had been told a few years back that there was a porcupine in the neighbourhood, a big old boy, but last year, Billy showed up, and due to his size, we figure he’s a young descendant of Spike.

One night last week, i chanced a look out the window in the wee early hours, and  saw this:

This is the crucial photo, but alas, the camera didn’t catch when he fell off the top of the fence, and lay there stunned for a few seconds! I wanted to run out and check him, but how does one pick up a porcupine and set him back on his feet????? 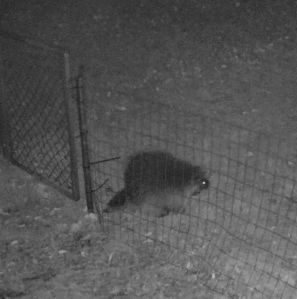 And last night, we discovered that porcupines can really really climb! The apple tree is at least 20+ feet tall, and here he is, at about 15 feet, munching on apples.

He’s actually a rather mellow fellow, no threatening noises or bristling–though i wouldn’t test him cornered, on the ground–and fortunately DogFaced Girl stays well back when he is in the yard, with her just sounding the alarm.

We still haven’t, and probably never will, have moose, bear, cougar or bobcat in the back40, though i’m sure if we weren’t as far southeast from the mountains and plains, that we would see them at some point!

Welcome to the Barr Home Hostel and Buffet for Wayward Animals 🙂

(Our first experience with Billy is here.)

Off for a holiday, our first in years!
4 days (including today) left for SALE in shop. ENDS June 17/21.
Thundering sky! Eight days left in the sale and the shop is stuffed! Lots of natural colour and natural fibres to add to your stitchy stash! See profile for shop info and save!