Not all threads are created equally, especially when it comes to dyeing them with natural colourants!

I’ve had a few flubs along the way, as i build my stash for stitching with, but in the end, each has it’s own qualities that are useful. The major fail i had was a thread i thought was 100% cotton, but since the label had been long lost, and i generally haven’t collected any synthetics for a few years now, i threw it in a madder pot and expected good results automatically. HA! There must have been some acrylic in this one, as it barely took any colour:

Pink from madder, pale lilac from madder with post mod iron dip, but this thread was just too soft and lovely on its own to throw out, so i then dipped them in indigo, because indigo dyes *everything*, it being SO substantive! 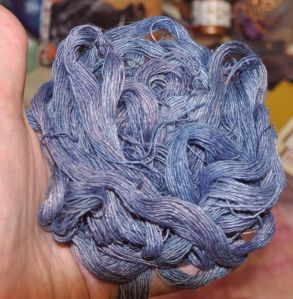 And there’s still some lilac-y hints! These give a lovely soft ethereal appearance when used, subtle gradations and shadings quite effective depending on the stitch used.

This one REALLY bothered me at first, a heavily twisted 4 strand embroidery thread, it just wouldn’t dye evenly due to the tightness of the wind, no matter how long i let it sit in the madder! Popped it in the indigo again and whoa! Look at that tweedy heather effect!

I use this one separated into two strands and love the way the colour shifts along each length. Because of the stiffness of the thread too, it tends to stand more proud of the surface. The way the colour took, and the spin of the thread, give it the appearance of disappearance visually when used on darker backgrounds! Fantastic for texture!

And these were a lesson also in the “weight” of a thread, the left being a crochet cotton, the right a stray spool of fine upholstery thread:

Due to my inexperience at the time, the indigo didn’t grab every spot, because of the way the threads were wound, tied and handled. Both are heavier, thicker threads that really lie loudly on the surface, or build a heavy tactile line, again with different stitch types.

It may look as if i’m using indigo to “fix” problems in incorrect procedures, but it’s co-incidence i swear 🙂 I do pride myself on proper scouring, premordanting according to fibre type, and using dyes that are actually dyes, not stains or food waste nonsense. (Again, no beets, beans or berries here….) These “fails” were inexperience, haste, and not testing unlabeled fibres. Lessons learned!

While every stitcher needs a substrate to stitch on, whether it’s conventional fabrics, plastic, metal, paper or toast, it’s the threads that get me excited. I’m continually building the inventory, and am thrilled to say that now i can depend on my own skills to add so much colour, without using commercially dyed threads, or having to worry about matching dyelots! There *can* be subtle differences in dye baths due to the inherent nature of these dyes, but at least the reds are still reds, the greens are greens, the blues are blues, etc etc etc, but never like this debacle with synthetic dye……..

And i wanted to share a very evocative piece of poetry that my friend Dana sent me.

The Many Ways the Light Gets In

​​​​​​​
It was easy to judge those Jane Austen ladies
languishing all afternoon over embroidery
pulling thread in and out of hooped linen
as the world spun round without them.

The bone stays in the starched bodice of their dresses
forced an upright position,
the way nuns in a cloister sit
all spine and neck erect
to better access the “no thought”
they need to taste
the honey of meditation

centering their minds
to a pinpoint
of light

then today
I found myself
deep in silence
pulling a rainbow of silken threads
through a hooped grid
the rhythmic in and out
of the steel needle flashing its tail of color
dissolving all thoughts in whorls of amber
sapphire, magenta—
falling upward
each stitch an entrance.