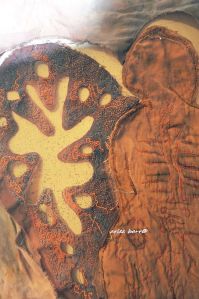 Shooting photos in my studio at dawn makes for moody presentations, but here it is really:

Despite the flurry around the dyepots again this week, i have been stitching as much as i can. That distraction resulted in not a week of stitch, but two, though the second one will take less time due to less surface area! I’m at the point too where i can start thinking about what will be behind the wing. It can’t fight, but it can’t “disappear” either.