It’s been a very tough 1 month and 22 days since MIL’s passing. Stress, grieving, anger, logistics, managing 2 houses for clearing, cleaning and moving, official paperwork, semi-serious health issues (yeah no cancer in bowels or gastric system!), family dramas (resolved), and just the day to day stuff of a normal life means i have lost 12 pounds (it’s a start…..) and am physically and emotionally depleted. There is light at the end of the tunnel though.

I now have a studio space that is bigger physically, a room that ironically started me on a serious look at textile art (as much as i hated being there with MIL constantly disrespecting boundaries and privacy), and that i have returned to after 10 1/2 years! I *will* miss my big studio window, and have to photograph things in the master bedroom because of the light 🙂 , but i have more wall space, better storage options and even room for a table and 2 chairs should any one ever drop by for a cup of whatever. It’s not a magazine pretty place, but it’s out of the way (basement) and a definite, defined, definitive work area and that’s what i need, especially with the paucity of creativity for the last year or so. (I have never had a “pretty” studio and don’t give a shit about that anyways, so a moot point:) )

HA. I haven’t done anything creative since the end of September, unless digging up rhubarb roots for natural dyeing counts, so i’m itching to get this organized. There are two more of those big wall units to move in here, and a large 4×8′ table to set up. The Rubbermaids  still have to be sorted as to garbage, donate or keep, SORTED! Only 5 full, 3 empty!) but what is left will be stored under the stairs out of the way. I got rid of 4 large plastic bin towers, but somehow “inherited” 2 from MIL that didn’t get tossed, so they will probably go against the same wall. Mostly useless as i found along the way–drawers too small, too many drawers for same thing because of the size, not very stable, not really stackable as the weight presses down and prevents easy opening of drawers below. Fine for small studios with less stuff to store, but ultimately not good for my purposes, and practice! Two though are manageable and will have the tiny stuff no doubt. Or i may just toss/sell after all. The walls have to be patched and repainted, and more lights put in, but it will be functional very soon. 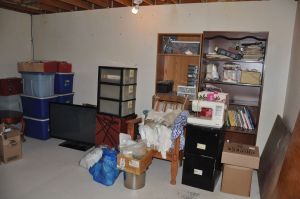 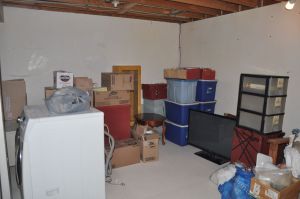 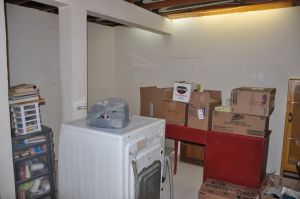 Once the washing machine and TV are out of the way! The space is about 20 x15 in main area, with a little 8×4 alcove.

OOOO, i’ve found a LOT of spruce cones in the immediate area, so i’ll have to give those a go for dyeing with. Might only get tannin results, but wth 🙂 And i have to amend that crossed out line in the first paragraph: we’re within a 25 minute walk to one of the largest urban provincial parks in Canada! Fish Creek Park here i come! I have to respectful though (as i always am when gathering) as it is a protected area, both for plants and wildlife, which means gathering only windfall and invasives. DogFaced Girl will have to stay on leash, not quite as enjoyable for her, but we follow the rules in this regard–and sometimes there are not only deer, porcupines, rabbits, skunks and snakes, but cougars and bears!!! And considering that when i stop to”harvest” she usually (and sometimes annoyingly) lies at my feet, it doesn’t matter that she’ll only be leashed 🙂 (If i could just get her to hold the bags open for my collecting, or carry them after….)

In the flurry of tossing and donating my MIL’s “stuff” (i am SO tired of this), i did exhume some treasure, hidden under enough household linens to wash, dry and bed 5 households (i swear): 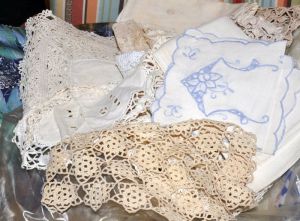 Gorgeous pristine white cotton crocheted tablecloths, embroidered and cutwork pieces, battenburg lace, filet lace, small pieces of crochet, needlelace, a few machine embroidered bits, these will be scoured, mordanted and treated to spa days in various dye pots. I’m thinking too of wearable art again as it would be a shame to cut up some of the larger pieces! (Note, these had been “collected” by Jane, as she sadly had neither the talent nor the will to do such work.)

Since i have a rather mundane sewing task today, sewing up privacy curtains for the old house (doing the landlord a favour, because we still love that place!), i’ll be starting the switcheroos down there today. Dig me out in a couple of weeks, would ya?

2 responses to “the new digs”