I think my soda ash tests needed a fresh mix as well–i adore that orange from the test above, not as apparent in the sample on the bottom of the page below! 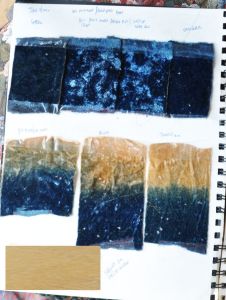 Below, the two on the left are linen, quite disappointing! The linen i ordered before Christmas is crappy quality, stiff and feels cheap. I know linen is supposedly harder to dye because of the plant waxes and pectins, but the results were abysmal! I followed all my usual protocols so not sure what the difference was. *Usually* i find rhubarb, whether root or leaves, somewhat inhibits the uptake  of dyes……… For that reason, i never use the leaves anymore. I think it’s the oxalic acid, but also would suspect the roots have more than the leaves, so it’s a mystery!

A mystery because look at the quebracho rojo on the same linen! I was thrilled to see that once rinsed and dry, it was a definite pink, quite the surprise as usually qr is touted to give only pinky tans and browns on cellulose, and paler in range than protein fibres.

I have a different batch of linen from the same supplier that is supposedly the same thing, but the difference is amazing–full handed, thicker, FEELS like linen, so we’ll see what the results are on it.

And the rest of the qr tests: 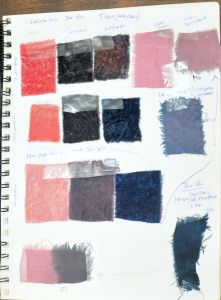 It’s  bit hard to photo these correctly: the velvets on the 2 top left are pinker than here, not as orange. (And OH do i love that lavender from the third extraction with an iron post mod!

I’m also testing Ugandan marigolds! My son brought me some when he came back last week (and YES it was all legal, above board and phyto-sanitarily correct, according to customs regulations! I wouldn’t dream of having anyone smuggle or mail un-regulated product to me!)

5 responses to “warming the vortex”

Off for a holiday, our first in years!
4 days (including today) left for SALE in shop. ENDS June 17/21.
Thundering sky! Eight days left in the sale and the shop is stuffed! Lots of natural colour and natural fibres to add to your stitchy stash! See profile for shop info and save!