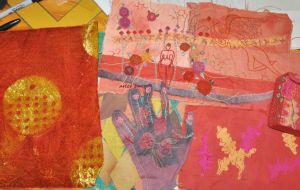 I pulled  a bunch of unfinished pieces, samples, chunks of fabrics etc and though initially i was going to spread them around the whole coat, realized that a lot of smaller pieces meant more time needed for figuring out layout and balance. I don’t want to just be dibbing together a bunch of small bits and then fretting about how to maintain continuity. This isn’t supposed to be a garment made of samples, it’s not to be a Sampler Coat, but a way to integrate and set off/off set certain components i already have, and to build a new Thing. Honestly too, though i have a lot of ufo’s, i don’t have enough to spread around the whole garment and feel settled as to design. I’d spend more brain effort trying to have meaning in placement and figuring out how to “blend” the “stories”, than i would have pleasure in the outcome!

So, obviously, there’s some new work to be done to make this mean something. One of the ideas that has stuck in my head was this: 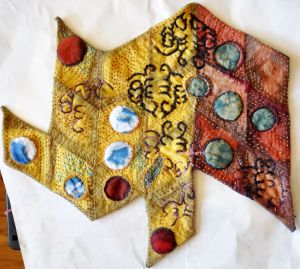 I LOVE this piece, (sadly still wanting to be mounted on something), enjoyed the making, the design, the flavour, the colours, everything that occurred from a happy mistake in sewing together. This is a thing that can have size without being overwhelming, that fits (i think, and that’s what counts 🙂 ) with the esthetic and some of the bits in that top photo, and that i know i will like doing. I’ve chosen mainly tones of red from my madder stash, have seamed the pieces together and shall start the embellishing now.  This so far is the right sleeve, with the “front” of the sleeve being on the right: 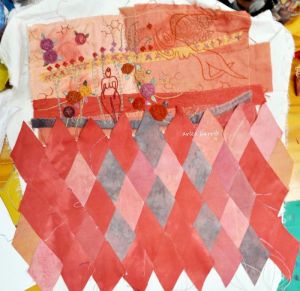 Certainly more “regular” looking than the piece above, but it will evolve with the stitching, so could become quite irregular!

And as always, nothing is set in stone, so this or both pieces may migrate elsewhere on the DillyDally coat.

One response to “DillyDally coat, part 2”

4 days (including today) left for SALE in shop. ENDS June 17/21.
Thundering sky! Eight days left in the sale and the shop is stuffed! Lots of natural colour and natural fibres to add to your stitchy stash! See profile for shop info and save!
June sale! Please read the listing on my shop site for info on applying discounts. A return of the Velvetarian's Delight is there along with a few other beauties, and I will list continuously as magic emerges from my dyepots.