Specifically, this type of indigo is Indigofera suffruticosa, a more tropical type than what most grow. Please bear this in mind for my “review” of growing it. Results may vary with other varieties like Indigofera tinctoria. (I have grown Persicaria tinctoria before, but that’s another post, and a variety/species to try again next year.) I was asked by Deb McClintock to share this as advice and experience in a climate than is very different from Texas (where my seeds came from her plants) and other warm/hot/temperate states, provinces and countries, compiling several previous posts and the final results.

I of course started my seeds indoors, May 16th, and placed under a grow light, a necessity in Alberta’s climate. Even the seeds released some blue after soaking overnight! We have a shorter growing season, colder nights (down to 5C –even in the summer—due to our altitude), temperatures rarely going above 30C (86F) and while we get lots of sunshine, my yard is not optimum for catching it! They were sown in a regular potting mix, augmented with a bit of sheep poo fertilizer. I watered them by soaking once a week as they didn’t seem to need much –in fact i’ve never had them wilt even when i forgot to water! Kept under lights until the end of May and then planted in a small pot, they didn’t grow much at all, though they did survive 3 hailstorms! I chose to pot them also because i have a very tiny yard, and the best way to get enough sun on these babies was to put them in something moveable, which was done up to 3 times daily. 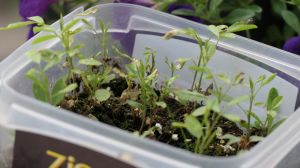 By Aug 13th, there wasn’t much growth or improvement, so i transplanted then to a larger pot placing them inside the radius of a large peony cage as well, again with a good layer of sheep poo, a composted manure that usually helps enough that i swear i can see things grow 3inches to a foot a day depending on the plant …..not so much this time…… and wrapped the cage in plastic to trap heat, and which also protects them from hail, a too common occurrence in Alberta summers. I had noticed that any time the night temperature dropped to or below 15C, the leaves would fold down, like a mimosa pudica (the ol’ kids favourite “sensitive” plant). Incidentally, a larger pot does not guarantee growth–i just figured if they DID suddenly go crazy, i wouldn’t have to shock them by transplanting after the fact. Each week, i gave them a weak feeding of Alaska Fish Fertilizer, as i don’t know how deep the roots go, or if they are even down to the layer of sheep poo amendment. 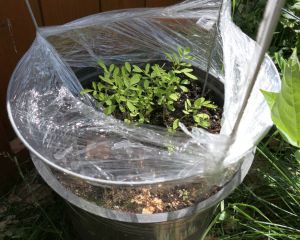 Wrapping them did seem to help. The photo below was taken Sept 9th. I covered the top as well with plastic, creating a small greenhouse. We did have ONE night of frost warning Sept 8th, but i don’t think it actually went below 2C, so the plastic helped, though i also snuggled it up to the tomatoes and threw a heavy flannellette sheet over the whole area. The plants at that point were at a  barely 10″ height. 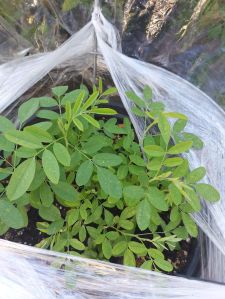 In the week before i brought them in, Sept 22nd to 29th, our temps started showing autumn, ranging from 14C to 23C during the day and 4C to 8C during the night–this was also the period, it showed an impressive change, filling out and getting woodier stems! At this point, they are still only 12″ high, a far cry from Deb’s 6-8′ beauties!   I figure it might have improved greatly as a last ditch rally: “NO NO NO, i don’t wanna die because winter is coming! Imma making leaves, lookit me, maybe i’ll flower! Don’t let me die!” 🙂 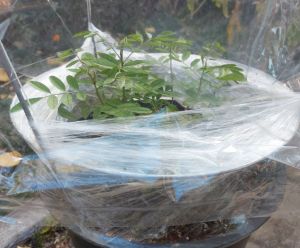 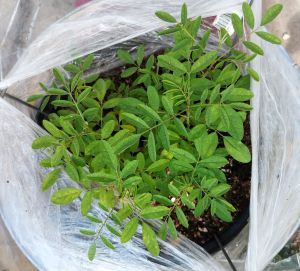 Incidentally, though we had something in the yard that chomped all my honeyberry leaves down to nubbins, and then attacked my rose, nothing seemed interested in these babies. Perhaps luck, perhaps no pests here of the type that would be interested. No yellowing due to soil or water factors, no sun burning, so viruses of any type. Hoofies crossed that no spider mite will occur now that the pot is indoors.

I didn’t want to tempt the Fates though, so brought it in on the 29th–and FREAKED the morning of the 30th as it had folded down so much i thought it was dying!!!!!!!!! I set it up the evening of Sept 30th under “professional” grow lights, near a heat source, and it recovered, so i’m hoping it was just from being near a partially opened window for that night. (By “professional”, i mean Grow Lights, the kind used in the industry–greenhouses, plant nurseries, cannabis set-ups–not the cheap dicky ones sold by Wallymart or the like. If i’m going to invest in something that takes time and some technology, i invest in as top of the line i can afford, or don’t bother.)

Here’s the grow light set-up, nothing fancy: a saucer on a stool, a heat vent in the floor behind–though i put a small cardboard diverter on that so it doesn’t blow directly on the pot—-NOT LETTING CONDITIONS FOR SPIDER MITE HAPPEN!!!!!!!!. and the grow light hanging from ceiling about 2.5 feet above. The light can be adjusted up as/if the plant gets taller. (HOPE HOPE HOPE.) I intend to baby it for at least a month, thinking that longer than that is not going to do much for growth or volume for use. 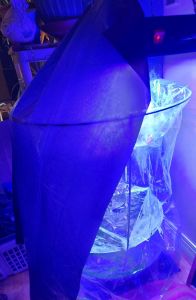 Had to put a dark bag on the outside though to save our eyes, as this is in the living room! The light goes on at 6am and off at 7am, hoping the timing is okay for hours. (It’s not like there’s a manual for this sort of thing, for any plant!

Part two will be written in probably a month as i see what happens in its new crib :), and then hopefully, enough leaves gathered for at least a teenyschmeenyweensy indigo extraction experiment.

EDIT OCT 3/20—-Talk about freaking my beak! Within 5 minutes of turning these lights off at night, the leaves fold down COMPLETELY. I would assume this is a defense mechanism of sorts to conserve both heat and water expiration, so light *and* temperature affects this. Fortunately, they come back to full mast in the morning, on their own, as soon as light starts to creep in from the patio window, or the light is turned back on.

5 responses to “growing indigo in a northern clime, part one”

Roughs for roses. I don't keep sketchbooks that make anyone gasp with wonderment and awe: I consider them workhorses because i' d rather be making/translating ideas into the flesh, then illustrating them and (to me) wasting that time. I greatly admire those beautiful tomes, but I don't have the patience or interest. I plan on doing a bunch of these roses to use on my DillyDally Coat. (Naturally dyed of course😁) Besides, when I sketch or paint ideas, I sometimes ruin things before I can stop myself. The last shot with colour is heavy-handed but I like the colourway!
Hesitant to work with silk velvet? I have some small "decks" of 5 different colourways, and some tips to work with this slithery slippery sneaky fabric that will have you easily adding to your stitchy vocabulary. See profile for shop info and first comment for a link to a mini tutorial.
Wow, these cotton embroidery thread shades are hard to photograph! In some lights they are browner, in some bluer, in some more purple! To me that means there's a lot of life and nuance to them and I'm looking forward to using them. This was the test batch, and thank you @bluetrilliumtex for the Canadian grown weld to try out! There's a bigger run being done now and I'm hoping for a wider range of greens and greeny-blues.