I love what i do,  but it’s time to add a new approach. I had a reasonably successful run as a wearable art designer (Albedo Artclothing) from ’93 to about 2001, and my big big studio was always humming with work. Over the last couple of months, ideas have been popping into my head as to how to translate what i do into something one would wear, fun, bright, unique but comfortable, un-contrived and mixable with a person’s favourite skirt, top or pants, not so over-the-top as to be laughable or “inappropriate” for an occasion, but still completely different from what every one else has.

I have NO idea how long each piece will take at this point of planning. Making art by hand is not the same as whipping up something on the sewing machine or serger, slapping on a few applique and some exotic buttons—not that at that time there was anything wrong with that–it was “of the times” after all, and there were not a lot of truly hand crafted pieces, unless you were one of the 11tybajillion dollar rich persons who shopped bespoke couture somewhere in Milan or Paris or some exclusive by appointment only atelier on a hidden street in Lower wherever……

Yes, there will be machine work to assemble, because the “hand crafted” aspect i’m talking about is the design, the fabrics and embellishments, and the embellishing itself.

AND it’s still going to be with natural fibres and natural dyes, because that truly is my passion in all of this. I’m rarely attracted now to commercial fabrics, and i never wear synthetics as they make me feel strangled, hot and stinky, as they just don’t breathe.

This piece is what started me thinking about wearables again: 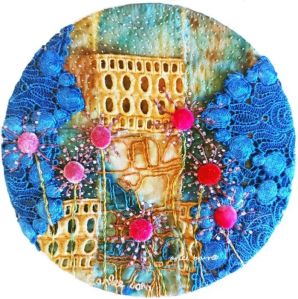 I’ve culled other ideas from previous work too, most done in the last 2 or 3 years. I’m also going through photographs of the previous work i did as Albedo Artclothing, because i know there’s stuff there that can be distilled as well, without being re-hashes or cop-outs. I believe it’s just ambitious enough to accomplish but not so much that i get bogged down or lose interest. Waking up excited this morning tells me i could be right about this, as i haven’t felt this way for a lonnnnnnng time!

“Unknown Sister” was a separate online shop and blog for awhile, for wearable accessories, and i decided to resurrect the idea specifically for this again.

Since i have no idea how long it will take to finish something like this as a wearable, i am projecting the first project won’t be done until the end of March. I’ll be keeping a log of sorts about time spent on it, so i can pre-plan future pieces, and re-learn time management (not a strong suit anymore!). Maybe it will be done before that deadline, but that IS the deadline, so we’ll see!

Let’s have some fun!

2 responses to “(drum roll, please) Unknown Sister is back”