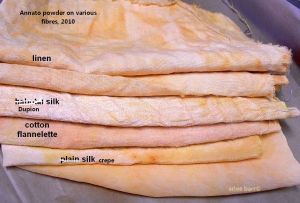 Annatto results from 2010—-corrections for silk types added today— i was still learning about silk, as i’d never used it before in *anything*, believe it or not!

The “Way Back Machine” aka my own memory dredged these up, from the first few months of my natural dye experiments. I had Jenny Dean’s book “Wild Colour” (STILL my go-to bible for all things natural, along with her other books), but could find only Annatto powder in the “International” aisle of the local StoopidStore. It was cheap in one sense, i think 50cents for a package, but of course i look at the weight (10 gr!!!!), and wonder if it was “cut” too with any waste plant material, and understand why i had to use 3 packages of it to get the results above! Not so cheap after all, except in terms of colour depth.

Pale, but pretty, i still like these shades, but now that i’m getting more serious (ie FOLLOWING THE INSTRUCTIONS–though there’s always room for experimentation), i lucked into actual Annatto seeds, thanks to my local dye and textile friend, Susan, who got these for me. And the cost is pretty much the same per OUNCE! By the way, if you really really REALLY like orange shades, you can buy Annatto seeds on AliBaba by THE METRIC TON for a mere 700US.

I could see the difference the minute i added a miniscule amount of soda ash to the bath. I don’t even remember using this that wayback time.

Of course, cloth ALWAYS dries a lighter shade, but this bodes well.

And after an overnight soak (recommended, seeds left in, though they can be taken out also):

Below, the results all together:

Top left, gallnut extract pre-mordant, below unmordanted cotton, unmordanted silk. Top right, previously madder dyed cotton with matching doily, below previously madder and tansy dyed silk, bottom centre, unmordanted white cotton flannellette. Annatto doesn’t really “need” a mordant, but given the latest session of pre-mordanting craploads of cotton in readiness for Res 2017, i hucked a piece of gallnut extract mordanted cotton in as well, just to see if there was any difference.

I flung in two pieces of silk and some silk thread separately *after* the cotton was done, as different fibres have unique uptakes, and animal fibres grab the colour first. Best to take advantage of that after the cellulose fibres have had their turn–i figure it’s one way to “exhaust” the bath as well;) (Two separate baths if you want to do both in one session.) One piece had previously been dyed with madder over tansy, one was white and un-mordanted.

I plan on doing some other tests with various modifiers and post mordants as well, so who knows what shades i’ll get in the end? And some/most are slated for overdyeing with other colours.

EDIT: This dye material is INCREDIBLY POTENTLY STRONG. It immediately stained my stirrer, and at 3TBSP per 3L water, i’m pretty sure that next time, i’ll use much less, perhaps even “thirding” the amount of seeds to water. Of course i got a LOT of dyed fabric from this pot!!!!!! (I also did not cook and grind into a paste, as some do, as the seeds gave up their colour readily without a messy extra step. I suspect this was the influence of the soda ash–before i tossed that in, the seeds just laid sullenly at the bottom of the water, with no bleeding.) And sthere’s still a lot of colour left in the bath, so i’ll decant that into something dark and airtight, dry the seeds, and store all for the next use.

However, it can be used as a base for other colours, and if they are substantive, or more resistant to fading, can hold the colour better.

And note, supposedly, annatto used as a food colouring has been linked to certain childhood behaviour disorders, and can cause an anaphylactic reaction in some!!!! As always, just because it’s Natural, doesn’t mean it’s safe for Everyone.

4 responses to “fifty shades of orange”